Sale on canvas prints! Use code ABCXYZ at checkout for a special discount!

A Tribute To Our Pacific Ocean Voyagers 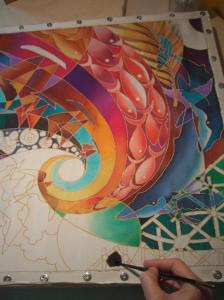 This is one of my newest paintings - a tribute to the seven Pacific Voyager vaka or double hulled sailing canoes, which have just completed an epic journey across the Pacific Ocean. The vaka project has seen indigenous people from island nations across the Pacific collaborate to revive traditional navigation methods, while spawning new interest in the preservation of cultural practices and respect for our ocean environment. Using the power of wind and sun to sail through the Pacific archipelagos and across to North America and back, our vaka sailing crews have become local heroes – bringing marine conservation, and pride in traditional customs, into the headlines of our mainstream media, and into the conversations of Pacific islanders across all generational and cultural divides...

As part of the celebrations marking the safe return of the seven vaka to Fiji in June 2012, a number of local artists participated in “Oceans Alive”, an exhibition of fine art held at the Fiji Museum in Suva, Fiji's capital city. “Tribute” was created especially for this event. The initial ideas that I had for the painting led me on my own interesting voyage of discovery: researching about the traditional navigation methods that enabled settlement and trade throughout the far flung islands of the Pacific – involving remarkable feats of endurance, skill, and a close, knowledgeable affinity to the natural world.

The mesh of knotted sticks in the corner of “Tribute” represents a traditional Polynesian stick chart, used by sailors to show the direction of currents, wind, and waves. Small shells fastened to the sticks represented the position of islands.

When a flock of Greater Frigate birds circled high over our home not long ago, their stark black, prehistoric-looking forms silhouetted against fast-moving clouds, my studio team exclaimed excitedly that there was bad weather on its way – the kasaqa would not be flying inland like this otherwise. I was intrigued by this local form of weather forecasting (it proved true – this was the week of the huge floods we had here in Nadi last March!) – and delighted to discover when working on this painting that frigate birds were also important to ancient Pacific navigators: remarkably, this species does not have the natural oil found in the feathers of most seabirds, meaning that they cannot land on water to rest mid-flight. They therefore never venture more than about 50 kilometres away from land, in order to be able to return to solid ground before exhaustion sets in! For this reason, traditional Pacific sailors used the sighting of frigate birds to guide them to land not yet visible beyond the horizon... I will definitely be painting more of these unusual birds in future compositions!

Last but not least, this painting includes the forms of seven vaka, their twin, triangular sails filled with wind. Six of the canoes, each representing a specific island nation, had rust-colored sails, while the sails of the seventh vessel, with its international, pan-Pacific crew, were white. With the forces of nature portrayed with dynamic movement of shape and line, I have tried to reflect both the vulnerability of the vaka, and their sense of purpose as the spread their message of ocean conservation to the rest of the world.

For more information about the Pacific Voyagers project, visit http://www.pacificvoyagers.com. More about my own artwork can be seen at www.art-sigavou.com

From Vatulele Village to New York City - With Love 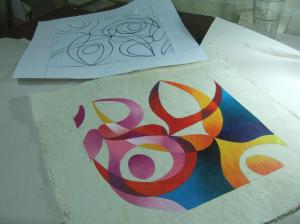 It's been fun working on another painting in my "Reki! ~Time to Dance" series. This one will be transiting the globe tomorrow - keenly awaited by a client in New York City.

Last month, the fiber used to make the barkcloth I am painting on here was the live, growing inner bark of a leafy green tropical mulberry sapling, in a family-run plantation on a small, coral atoll to the south of our island, called Vatulele. The bark was harvested by my husband's aunt Mala, one of many women from the seaside village of Ekubu who make a living producing hand-crafted masi, or barkcloth, using an environmentally-friendly, but laborious process of scraping, soaking, beating, and felting the fibrous mulberry bark into long, textured sheets. This traditional craft is practiced in only a few parts of Fiji, with the knowledge and skills involved being passed down from generation to generation of hard-working women.

Mala came across to the mainland by boat during the recent school break, bringing two of her children for some sight-seeing, and a big roll of lovely white masi to sell in order to raise money for school fees and other family needs. Our studio is filled with the pungent scent of freshly beaten masi every time we get such a delivery. It is an honor to be able to work with a material that is as steeped in culture and tradition as our Fijian masi is! 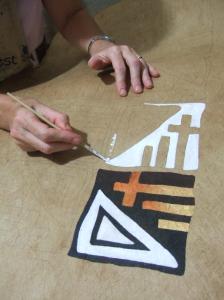 Deep-rooted spirituality, a fragment of African tapestry, gifts of traditional Fijian barkcloth, and an online encounter with an art-lover looking for a piece of art with personal meaning to take back home to New Zealand with her: these were the ingredients that inspired my latest painting project! "Easter Meditation" is painted in acrylics on traditional Fijian barkcloth. More photos of this piece emerging on my own blog: http://maria-rova-art.blogspot.com/